With more players than Fortnite, you have probably heard about Roblox—the game half the kids in the U.S. are playing. But what makes this online video game so popular? Here’s what you need to know about Roblox.

Roblox is Many Games in One

Roblox is a multiplayer internet gaming platform that allows anyone to design a multi-user online game (called a “place”) and publish it through the Roblox app. Games constructed for Roblox can vary in genre, but all games have certain interface elements and default player models in common. The default look of Roblox characters somewhat resembles Lego minifigures.

Founded in 2004 by David Baszucki and Erik Cassel, Roblox has been a slow-burning success that then went huge. According to Roblox, two-thirds of American children between the ages of 9 and 12 were playing Roblox in early 2020. On March 10, 2021, Roblox Corporation went public, listing itself on the New York Stock exchange and instantly gaining a $45 billion valuation. Roblox is a big deal, and it’s getting bigger.

What Kind of Games Are on Roblox?

Roblox games cover a wide variety of genres, with social chat, virtual pet, action-RPG, racing, and light survival horror games being very common. One of the most popular Roblox games is called Jailbreak, where you play as cops or robbers chasing each other. Another, Meep City, is a social role-playing experience where you buy houses and show off clothes and dance moves.

Those who play Roblox appear eager to overlook design issues in exchange for a rich online social experience. Many also enjoy being able to live out a fantasy life separate from their own where they can own a house, raise a baby or a pet dragon, and much more.

How Much Does Roblox Cost to Play?

In general, playing Roblox is free to play. Anyone can make an account for no charge. The key to Roblox’s financial success is a built-in microtransaction system based on a virtual currency called Robux. 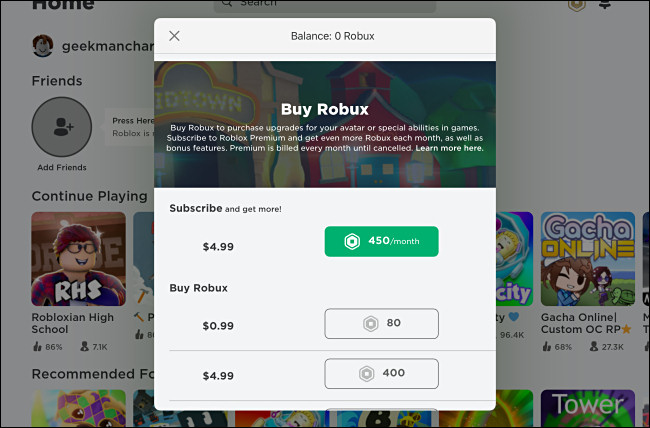 Players buy Robux with real-world currency using one-time purchases or a monthly subscription. In exchange, they can use those Robux in any Roblox world to purchase accessories for their characters (such as different outfits) or virtual items like race cars and pets. Some places also charge a Robux fee just to play them.

Can You Make Money on Roblox?

The PC and Mac versions of Roblox include a free tool called Roblox Studio that allows anyone to create games on the Roblox platform and publish them online. Publishers of Roblox places can potentially exchange earned Robux for real dollars if they are wildly successful, but they first need to achieve a certain builder status and have over 100,000 Robux accumulated.

Some creators have managed to make a living on their Roblox creations, including kids that made the news by earning enough to pay for college. But, overall, it’s actually very few people earning that kind of money. Gizmodo reports that 99.22% of Roblox creators make less than $1,000 a year.

Over the years, there has been some controversy in the media over the content of certain Roblox places and the potential for negative social interactions. The good news is that it’s easy to report abusive players on Roblox and block them completely. Also, the chat system automatically censors curse words and some restricted phrases, turning them into hash marks like “####.”

Roblox also supports a special “Account Restrictions” mode that limits the available Roblox places to a curated set selected by Roblox Corporation. This doesn’t keep all potentially questionable content in those games away from kids completely, so it’s up to parents to make the judgment call on each game themselves.

For parental controls, Roblox supports disabling chat, friend requests, direct messages, or invitations to private servers individually. You can lock all those changes behind a PIN to prevent kids from re-enabling them.

How Can I Play Roblox?

Roblox supports mouse/keyboard or gamepad controls on PCs and Macs. On tablets and smartphones, you can use touchscreen controls or link a Bluetooth gamepad for a more console-like experience.

RELATED: How to Use a Physical Game Controller with an iPhone, iPad, or Android Device