When you buy through our links, we may earn money from our affiliate partners. Learn more.

One of the most frustrating things about furniture (aside from said furniture shopping) is the delivery and installation. There are extra charges and 10-hour delivery windows that come and go — it just seems like an old-school way of doing things.

When my husband and I were looking to replace our 5-year-old faux leather couch, we decided to shop online and only at places that offered free delivery and had modular styles that we could put together ourselves. Like Ikea, but more adult.

I’ve known about furniture startup Burrow for a few years but never had a reason to look at it much since we had a couch. Around the same time that we were looking to replace ours, Burrow launched a full-grain leather version of its popular Nomad couch.

We tested the Nomad Leather King Sectional, a full-grain leather couch that would last years, if not, decades, along with a chaise and ottoman, all in black leather with walnut legs. The total cost was $3,790 — definitely not cheap or affordable by any means, but reasonable given the number of pieces we ordered and the durability of full-grain leather.

Burrow has since added new leather colors and styles to the armrests, legs, and pillows to the Nomad full-grain leather collection since I tested the couch more than a year ago. There are now three leather colors, three arm styles, three wooden leg options, three metal leg options, and bolster pillows.

Almost two years in and there’s still not a scratch, tear, or ripped seam to be found. And we’ve had young kids and dogs on it too.

Delivery and set up 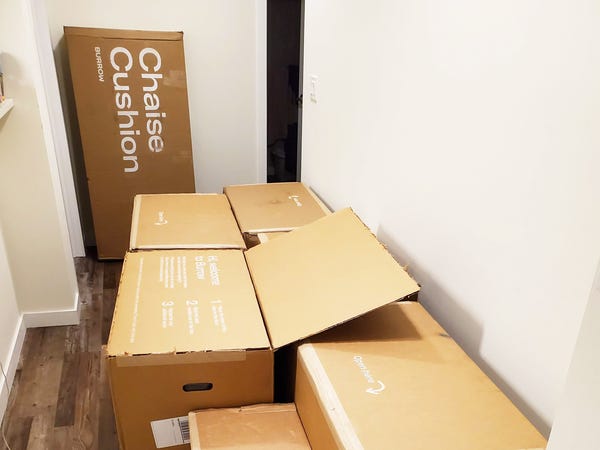 Each piece of the couch arrived in a labeled box so we didn’t have to open each one to find the part we needed.


The couch arrived a few days after ordering, and in several clearly labeled boxes. That was helpful as we unpacked boxes in the order of installation — seats first, then the side panels with low armrests, and finally, the legs. The chaise includes a long cushion that lays on top of a base and any seat you want, and the ottoman, well, it’s an ottoman.

The boxes also helpfully have holes for handles and easy carrying, and each item is wrapped in thick plastic so it doesn’t get dirty during transit. We reused the plastic to carry our old couch to a local donation center.

The couch is a boxy modular design, so you can shift the seats around however you want or even remove them to make your couch smaller, and the overall design and function of the couch will be the same.

Once we took out different parts of the couch to assemble, there was a big initial cardboard smell, especially on the right side. Thankfully, it’s up against a wall and the smell has since dissipated.

Here are some of the specs of our king couch with the chaise and ottoman: 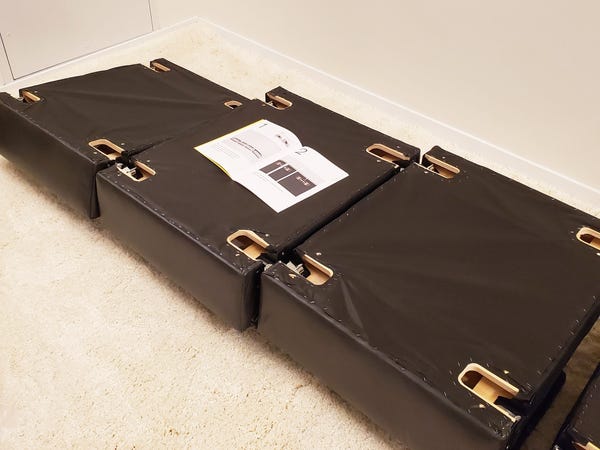 The couch has a modular design so you just lock and unlock the pieces of the couch to fit your space.


Instruction manuals are provided and easy to follow, so we didn’t have any trouble there. You basically put two seats next to each other and secure with a metal latch between the seats and on the underside, then move onto the other seats and armrests.

We had a lot of issues connecting the seats because the metal latches were so hard to find among the plush seats and secure. One person would have to use their entire body weight to force the seats flush against each other while the other would fumble around with the latches.

It took about an hour to set up the couch because of the latch issues, but some reviewers said it took 15 to 20 minutes. I’d imagine the latches were hard to deal with because the seats are well-padded and extend past their wooden frames, but if there’s a way to make this process more efficient in the future, I’m all for it. If it weren’t for the latches, I would imagine it’d take us much less time. 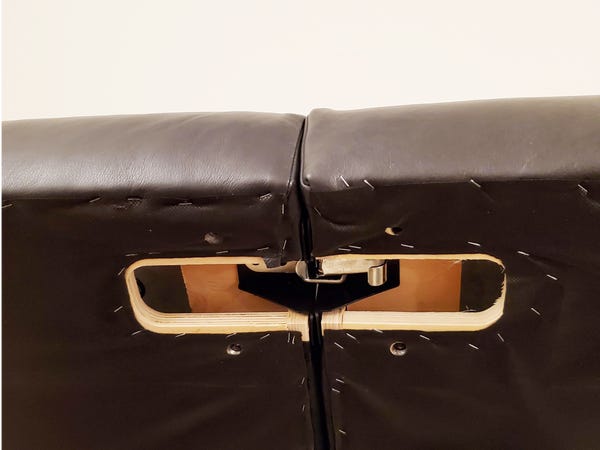 For a couch that costs nearly $4,000, I expected better quality than staples and paper-thin backing.


The general frame of the couch is made with Baltic Birch, a type of light-colored wood that resists warping. So far, I haven’t had any issues with the seats bending in the year we’ve had the couch.

The underside is covered in thin black fabric secured via staples that are unexpectedly cheap for a $3,000+ couch. During installation, I accidentally ripped through the fabric as I was securing one of the latches. I also noticed that one of the staples is just a little too close to the edge and is exposed when looking at the couch straight on.

Thankfully, both issues are on the underside of the couch so you don’t see anything. These are things I wouldn’t expect from a couch that costs so much and especially when it’s made with full-grain leather, but I guess there are bigger issues to have. 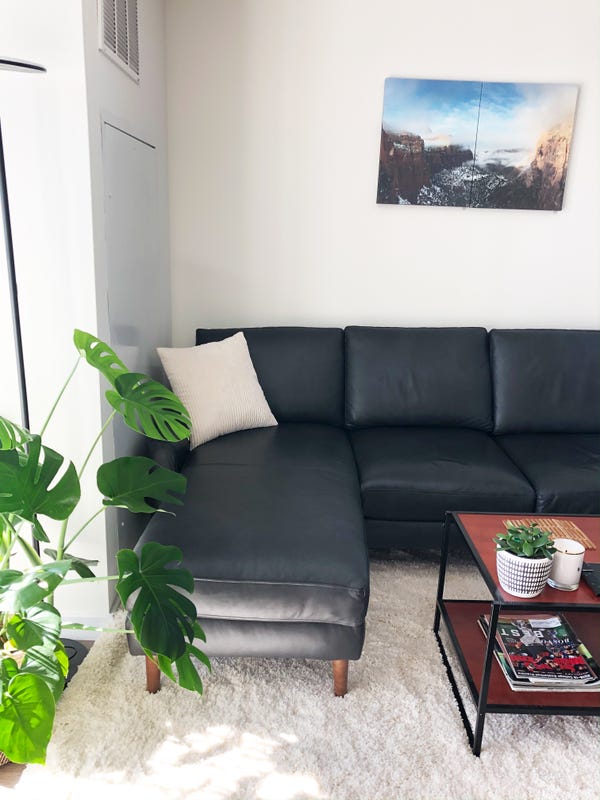 After using the Burrow Nomad couch for more than a year, it hasn’t lost its shape and the leather still looks great.


Despite doubling as a trampoline for two kids and a bed for a dog (neither are ours), the couch still looks great and the frame hasn’t warped or bent anywhere. It’s sturdy and doesn’t shift or squeak.

My husband has had a full-grain leather wallet for the past five years, so if that’s any indication of quality, our couch will last a long time. Full-grain leather is the highest quality of leather and ages well; it’ll develop a slightly glossy patina with variations in color.

I was personally worried about the feel and that it would get sticky and gross during the summer, but it was actually quite cool even after sitting on it for hours watching “Fixer Upper.”

The seat cushions were initially too padded for my liking, but it has squished down slightly. I guess that’s a good problem to have though since that means the seats are well-padded and comfortable. There’s a strip of fabric on the edge of the cushion so it doesn’t slide down the seat, a thoughtful design detail that goes a long way.

The couch also has a built-in USB charger which is helpful, especially for guests crashing on our couch.

Couches aren’t cheap in general, but given the quality of Burrow’s full-grain leather, I’d recommend the investment. Similar to a bed, you’re sitting on it for hours every day so you should prioritize quality and durability if you can. We have a full set (four-seater couch with a chaise and ottoman) so ours was expensive. But depending on the size you need, it can be a lot cheaper.

This is Burrow’s first leather couch so there are definitely certain things that can be improved down the road such as the fabric for the underside of the seats and the use of staples, but ultimately, these are small issues that didn’t impact quality or integrity. We’re already seeing additions like new leather colors, armrest styles, and pillows to the collection so hopefully, there’d be updates to the underside fabric and construction as well.