Samsung is gearing up to launch new Galaxy Buds Pro earbuds, which are likely set to debut in January alongside the new Galaxy S21 smartphones. The new headphones have a feature that’s quite similar to the Spatial Audio function available in the AirPods Max and AirPods Pro. 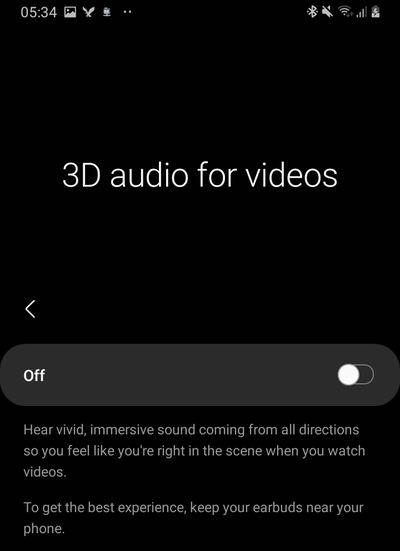 Though the earbuds aren’t coming out for a few weeks, we already know what to expect because Samsung accidentally leaked them in the Galaxy Wearable app, and
9to5Google shared details on the feature set.

The earbuds look similar to the original Galaxy Buds and have much of the same feature set, but there’s a new “3D audio for videos” function that sounds a lot like the Spatial Audio option that Apple brought to the ‌AirPods Pro‌ and then the ‌AirPods Max‌.

Spatial Audio is designed to provide a theater-like surround sound listening experience on
iPhone and
iPad using dynamic head tracking capabilities that make it seem like sound is coming from all around you.

Samsung’s “3d audio for videos” feature describes a similar experience. “Hear vivid, immersive sound coming from all directions so you feel like you’re right in the scene when you watch videos,” reads a toggle for the feature. “To get the best experience, keep your earbuds near your phone.”

The Galaxy Buds Pro also feature an equalizer with multiple presets, customizable touch controls, and a Find My Earbuds option. A new Voice Detect feature listens for when a person is speaking and lowers the volume of media, and there’s an Ambient Sound option for noise cancellation that lets in outside sound much like Transparency mode on the ‌AirPods Pro‌.

We’ll see the official unveiling of the Galaxy Buds Pro in January, and while pricing has not yet been announced, they’ll likely be priced similarly to the ‌AirPods Pro‌. 9to5Google speculates that they could be priced at around $200, $50 more expensive than the Galaxy Buds+.