Complaints about the potential lifespan of Apple Silicon Mac storage are causing concern that the current crop of M1 Macs could stop working within a few years — and have been stoked by unanswered questions, unreliable data, and a silent Apple.

Since the middle of February, social media postings by some M1 Mac users looking into the health of their computer’s storage have raised potential issues that they see with their new devices. It is believed that the onboard storage may reach a point where it becomes unusable at a rate some users believe is too fast to be practical.

The problem stems from a limitation that solid state drives have, in that each cell can only be written to a finite number of times before it fails. This is caused by the repeated erasure of a cell before new data is written, which can wear down the cells to a point where they don’t hold a charge.

Such a drive’s potential lifespan can be referred to as Terabytes Written (TBW), referring to how much data can be written to a drive that is covered by the manufacturer before there’s a chance it becomes unusable. In the vast majority of cases, the TBW limit of a drive will be multiple times larger than the capacity of the drive itself, and typically equates to years or even a decade of usage for most users.

In social media posts collated by iMore on Tuesday, some users are discovering that their usage of the amount of storage is higher than they expected. Using a tool called Smart Monitoring Tools in Terminal, the drive’s SMART data brings up a “Percentage Used” score, which refers to how much of the TBW a drive has achieved in its lifespan, among other data.

One user complains that their M1 Mac’s SSD is at 1% usage at over 2 months of age. Another’s M1 13-inch MacBook Pro with 16GB of memory and 2TB of storage reads as having used 3% in two months. In some severe cases, the usage percentage is allegedly above 10%.

Developer Hector Martin suggested that the 2TB MacBook Pro’s 3% results would proportionately equate to around 30% of a 256GB model’s usage. “If this is accurate some of these machines aren’t going to last half a year to 100%,” they reckoned.

Later, after determining available data suggests endurance ratings aren’t proportionate to drive size, it was suggested the “current known worst case” for a 256GB drive would have it reach 100% in about two years.

As to why the high disk usage has occurred, a likely culprit could be high swap file usage. This would make the drive usage a bigger problem for Macs with 8GB of memory, especially since many of the published results from the tool are from Macs with 16GB of RAM.

There are a few problems with the way the story has unfolded. For a start, the lack of decent SMART reporting in macOS itself led users to install tools like the aforementioned Smart Monitoring Tools.

It is likely that if there were better SMART reporting tools available, rather one that required installation and running it from the terminal, there would be a better picture of the current situation.

However, the results from the tool may not necessarily be accurate, due to consistent problems with SMART reporting in general. It also isn’t clear if the system on a chip and combined caching on the M1 is causing the SMART reporting tools to display incorrect data. 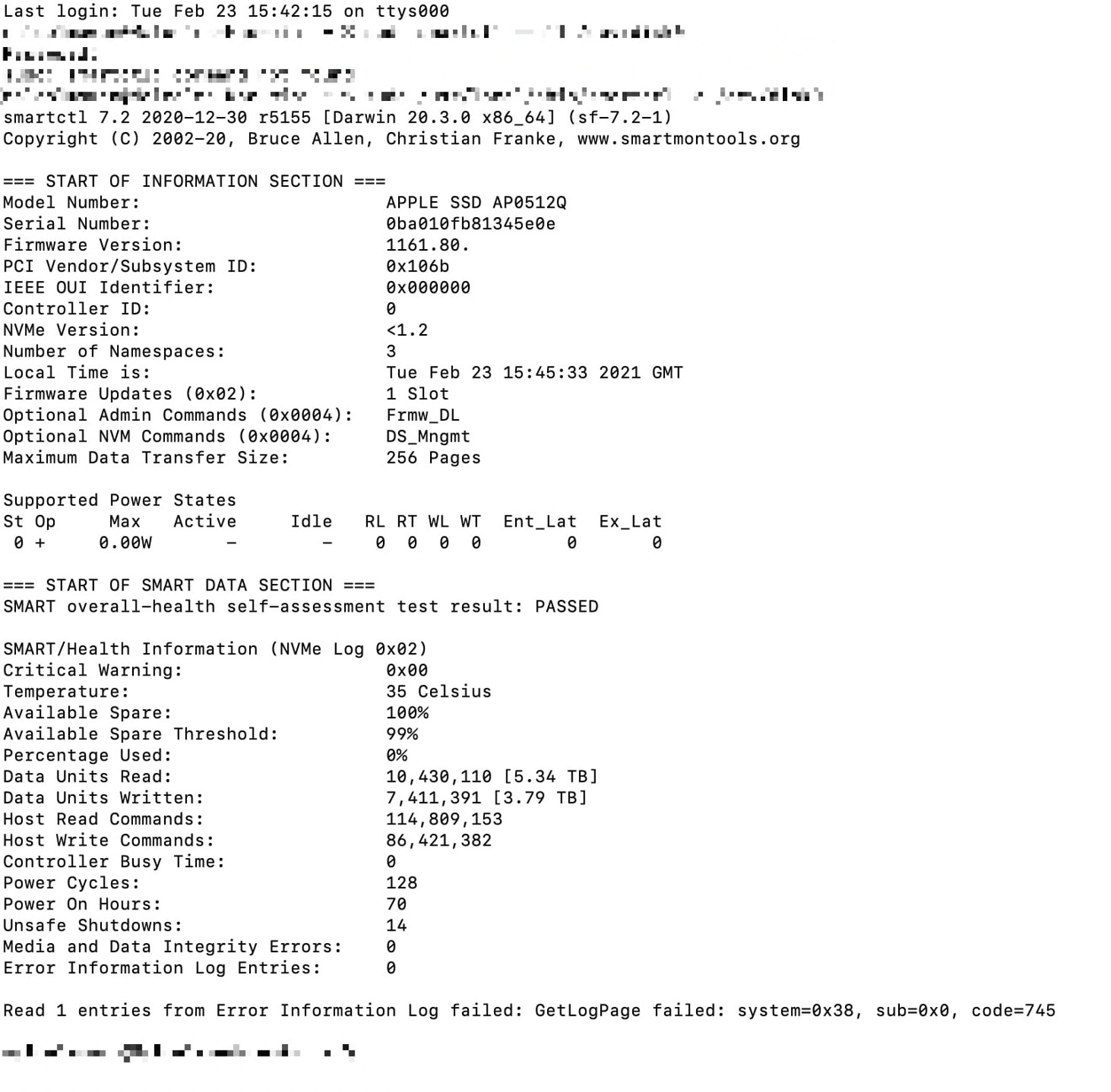 For example, published results of the tool repeatedly show users as having relatively low counts of “Power On Hours,” typically in the low-hundreds and lower. For Macs running for two months, this seems to be a little low compared to what would be expected.

In AppleInsider testing with its writers using M1 Macs since the issue first cropped up on February 13, the power on hours statistic showed 300 hours for one, despite being on for 23 hours a day since its initial purchase on the first day of availability. Another writer has owned their Mac mini for two months, and has racked up a mere 70 hours on that figure — about nine work days.

This may indicate that the tool isn’t necessarily receiving the correct data in its queries. We’ve been trying to get some concrete answers, and more data on the issue since February 15.

Without delving too much into the differences between different types of flash storage, Apple uses Toshiba TLC NAND flash for its drives in the M1 Macs to date. These are rated at about one complete drive-write per day.

The cells in an SSD are durable for at least 5,000 read and write cycles in the cheapest Triple Level Cell-based flash memory chips, though more typically around 10,000 cycles for mid-range Multi Level Cell-based chips. Even at the low end of the scale, that still equates to over a decade of usage based on the one complete drive-write per day rating.

If you take into account that Apple does not use the cheapest flash memory chips on the market in its premium products, this can only reasonably increase the lifespan of the drive itself.

There is also the fact that the drive won’t die if it hits that 100% rating for written data. The TBW is a measure for warranty purposes, with a view to preventing users abusing the storage beyond reasonable usage.

Even if the storage reaches its rated TBW, it will continue to work until elements of the drive cannot be written to anymore.

This also doesn’t take into account the concept of overprovisioning, when a drive producer includes extra storage capacity in a drive. This isn’t to give users more capacity, more to spread the gradual wearing down of the drive over more cells, further prolonging its life.

We ultimately don’t know what quality of chips Apple is using, nor the level of overprovisioning. However, as Apple’s first foray into Mac chips, it seems logical that Apple would err on the side of giving a better user experience and be generous on both counts.

As for the power reporting, it is probable that this is due to Apple replacing the NVMe power management with its own custom system. Apple Fabric, which acts similar to a PCI-E interconnect within M1, may also be interfering with data being fed back into tools.

Apple appears to be looking into the matter.

“While we’re looking into the reports, know that the SMART data being reported to the third-party utility is incorrect, as it pertains to wear on our SSDs” said an AppleInsider source within Apple corporate not authorized to speak on behalf of the company. The source refused to elaborate any further on the matter when pressed for specifics.

At this stage, there is no outward indication that Apple is planning to widely discuss the matter. Given the potential for headlines declaring that the “New Mac mini will be dead in a year” or similar, it seems like a PR issue that Apple may want to intercept instead of letting it snowball.

The affair also raises the question of software tools to determine the health of a Mac. While Apple includes battery health management elements in macOS, the same cannot be said for drive health.

The nearest thing macOS has to a tool for this purpose is Disk Utility, but while it is useful for managing disks, it remains terrible for determining drive health. The only element you have within is the SMART status line, which either declares “Verified” or “Failing,” with no real gradient, or data in any way presented to the user.

Elements like the Smart Monitoring Tool are difficult for typical Mac users to install and use, but anyone wanting more detail about how their drive is running has to look in that direction. This would be a great chance for Apple to add its own tool, one that correctly reports data about the drive’s health given the M1’s unique storage implementation.

Even so, just an official confirmation that it is examining the issue will probably go a long way to ease concerns — even if Apple ends up determining there’s no ultimate issue.