Sharing Shortcuts via iCloud appears to be severely affected by an issue that is stopping older links from working. 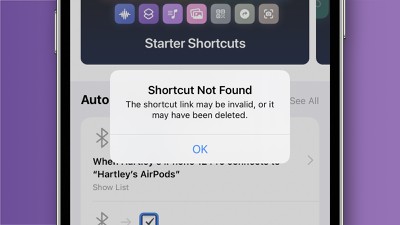 All older ‌iCloud‌ links for sharing Shortcuts appear to no longer be functional, rendering it impossible to add shared Shortcuts from links that were created a while ago. It is not yet clear exactly when the cut-off date for created Shortcuts links is, but broadly, links created within the past week seem to be unaffected and continue to work correctly. Apple’s own in-app gallery for downloading Shortcuts is also still working as expected.

When attempting to add a Shortcut from an affected ‌iCloud‌ link, users are now presented with an error message in the Shortcuts app that reads “Shortcut Not Found: The shortcut link may be invalid, or it may have been deleted.” The change has since been flagged by users on Reddit and Twitter.

It seems shortcuts’ links dating as far as last week have all been invalidated. Tested on iOS 14.4, 14.5b4 and 14.5b5. Links created today seem to work, though.@mattcassinelli @mralexhay @viticci, have you noticed that? Do any of you know any faster way to export 160 shortcuts?
— Rodrigo Araujo (@rodrigoaraujo) March 24, 2021

It is as yet unclear if the error is an intentional change on Apple’s part, as it could have added an expiry period to the ‌iCloud‌ links to prevent them from working after a certain amount of time, or if it is simply a server-side error that has invalidated all links created prior to an internal change.

Either way, the fact that the majority of links to Shortcuts are now defunct is highly problematic for sites such as MacStories or the subreddit r/shortcuts, which are heavily reliant on ‌iCloud‌ links for sharing previously-created Shortcuts.