Apple on Wednesday published its first fiscal quarter of 2021 results, reporting quarterly revenue above $100 billion for the first time. Here are some notes of interest from the report and call, including remarks from Apple CEO Tim Cook and CFO Luca Maestri on the particulars of both.

Apple reported record-breaking revenue of $111.4 billion, an increase of 21% from the prior year. It also posted quarterly earnings per diluted share of $1.68, up 35%. International sales accounted for 65% of the revenue during the quarter.

“This quarter for Apple wouldn’t have been possible without the tireless and innovative work of every Apple team member worldwide,” Apple CEO Tim Cook said. “We’re gratified by the enthusiastic customer response to the unmatched line of cutting-edge products that we delivered across a historic holiday season. We are also focused on how we can help the communities we’re a part of build back strongly and equitably, through efforts like our Racial Equity and Justice Initiative as well as our multi-year commitment to invest $350 billion throughout the United States.” 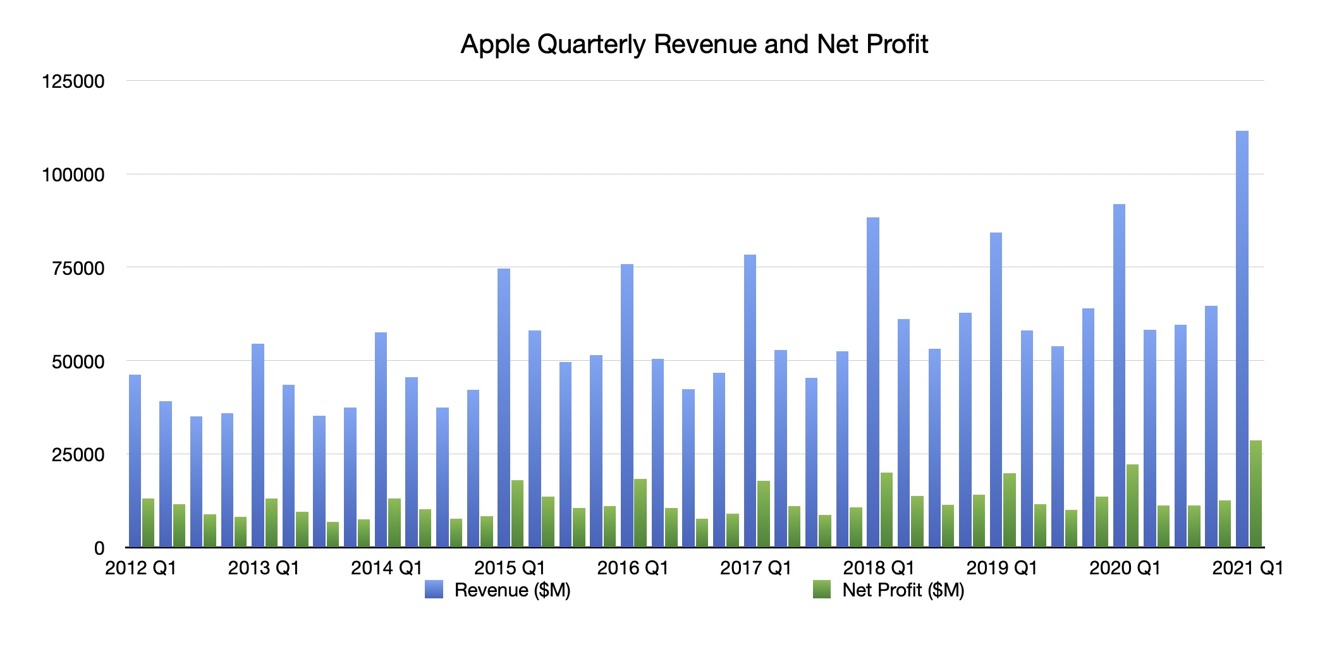 “Our December quarter business performance was fueled by double-digit growth in each product category, which drove all-time revenue records in each of our geographic segments and an all-time high for our installed base of active devices,” said Luca Maestri, Apple CFO. “These results helped us generate record operating cash flow of $38.8 billion. We also returned over $30 billion to shareholders during the quarter as we maintain our target of reaching a net cash neutral position over time.”

Broken down by segment, Apple reported quarterly iPhone revenue of $65.59 billion in revenue, Mac revenue of $8.67 billion, and iPad revenue of $8.43 billion. Wearables, Home, and Accessories brought in $12.9 billion, while Services clocked in with $15.7 billion.

Across most of its product lineup, Apple beat both Wall Street consensus and analyst expectations during the quarter.

Highlights from the earnings report and conference call