Metrolinx this week announced that commuters can now use contactless payment options like Apple Pay to pay for their fare on UP Express, a train that connects Downtown Toronto with Toronto Pearson International Airport. 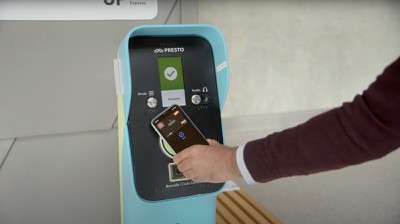 Prior to boarding the train, commuters simply need to hold their iPhone or Apple Watch near the PRESTO payment terminal to pay for their fare with a credit card loaded in the Wallet app — or tap a physical credit card. At the end of the trip, riders must “tap off” with the same credit card or mobile payment they used to “tap on” with to ensure that they pay the correct fare for their trip on UP Express.

If a rider is approached by a fare inspector, they can present the same credit card or mobile wallet used to pay the fare as proof of payment.

The contactless payment option has been available for UP Express adult fare since March 11, as part of a pilot program. Student or other discounted fares still require using a PRESTO card for now. Metrolinx plans to expand contactless payments to more transit agencies “soon” across the Greater Toronto and Hamilton Area, including the TTC.

“We’re currently working with the TTC to determine the potential timelines for this work,” a Metrolinx spokesperson told
Global News.

Later this year, Metrolinx also plans to add Interac Debit as a payment option for UP Express.