Apple today began selling the MagSafe Duo Charger that was announced alongside the new iPhone 12 models back in October. Priced at $129, the ‌MagSafe‌ Duo offers a ‌MagSafe‌ charging puck for the ‌iPhone 12‌, 12 Pro, 12 Pro Max, and 12 mini, along with an Apple Watch charger. 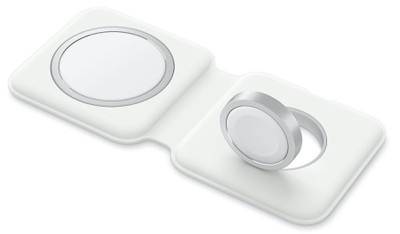 Though the accessory was announced in October and was listed as coming soon, it was not clear when it would launch. Orders placed today will deliver as soon as Thursday, December 3 when shipped, and it is not available for pickup in retail stores yet.

The ‌MagSafe‌ Duo features a foldable design for easier portability, and it ships with a USB-C to Lightning cable. The Apple Watch charging puck can be used flat, but there’s also an option to pop it up to charge the Apple Watch upright. The ‌MagSafe‌ charging portion does not have the same pop up option.

Before purchasing, it’s worth noting that the ‌MagSafe‌ Duo is not able to charge an ‌iPhone 12‌ model at the full 15 watts supported by the standalone ‌MagSafe‌ charger. Instead, it is able to charge at a maximum of 14W when paired with the appropriate charger.

Though designed for the ‌iPhone 12‌ models, Apple says the ‌MagSafe‌ Duo is compatible with older iPhones, the AirPods with Wireless Charging Case, the AirPods Pro, and other devices that support Qi-based wireless charging.