Days ahead of their expected launch and seemingly before official review embargoes lift, one lucky customer has already gotten their hands on the brand new 12.9-inch M1 iPad Pro. 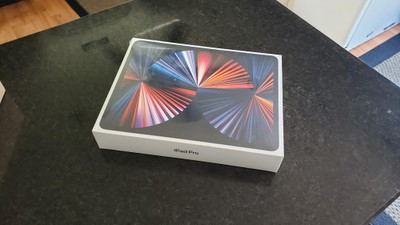 Posted on Reddit, u/PeterDragon50 has already received their 12.9-inch ‌iPad Pro‌ through retailer Nebraska Furniture Mart. The Reddit user says they placed their order when pre-orders initially went live and that the retail chain informed them that their
iPad was ready for pick-up, despite not yet having been officially launched from Apple. Apple says the new ‌iPad Pro‌ and ‌M1‌
iMac will be available starting in the second half of May,
most likely May 21.

Official reviews of the M1-powered ‌iPad Pro‌ have yet to be published, leaving many to ask the customer for first impressions and thoughts. The customer says that the new mini-LED, Liquid Retina XDR display is impressive with deep blacks and colors that are “definitely up to Apple quality.” Two videos (second one) were shared showing the 12.9-inch ‌iPad Pro‌ playing back HDR content.

Some customers who placed their pre-orders for the new ‌iPad Pro‌ on April 30 are beginning to notice their order status switch to “Shipping” rather than “Preparing to Ship.” The new ‌iPad Pro‌ has proven to be an early success, with estimated shipping dates already slipping into mid-July. You can learn more about about the new ‌iPad Pro‌ using our guide.