A shiny new phone is sure to be a gift that anyone can appreciate. The issue is, there are a lot of extravagantly expensive phones on the market today. While these phones may receive a lot of attention, they’re hardly your only options for gifts this year. And to prove that, we selected five phones that all cost under $500 which would make excellent gifts for those in need of a new phone.

What to Look for in An Affordable Phone

When it comes to comparing phones, there’s plenty of nitty-gritty info to look at, but these are the main categories you’ll want to use to compare models.

Apple’s latest budget phone made waves earlier this year for a few reasons, the biggest of which was the incredible performance. The iPhone SE is packing 3GB of RAM and the A13 Bionic processor—the same processor as last year’s flagship iPhone 11. Apple has also guaranteed five years’ worth of updates for this phone which is an impressive lifespan for a phone this cheap.

And the good news doesn’t stop there, as the SE features a great 12-megapixel camera, wireless charging, and a premium build thanks to its glass back and aluminum frame. The actual design of the phone is a bit dated with the large bezels making way for a physical home button (which includes a fingerprint sensor), and the 4.7 inches, 720p LCD display is nothing spectacular (but still more than fine for the size).

But still, as an overall package, the SE certainly impresses for the price and is a great option for iOS lovers or people who want a simple phone that runs excellently today and still will years from now. You have a few choices when it comes to storage options with this phone, with the price increasing steadily as the memory goes up. The default is 64GB, but you can also get 128GB for $50 more or 256GB for $150 more.

Best Performance for the Money

An Excellent Camera: Google Pixel 4a

When it comes to a clean Android experience, there really isn’t a better option than the Pixel 4a. This phone is an excellently scaled-down version of the premium Pixel experience in both hardware and software. The Snapdragon 730 processor, supported by 6GB of RAM, keeps up with Android well, and you can expect three years of major Android releases (including the latest Android 11) and monthly security updates. There’s also the great 1080p 5.8-inch OLED panel, 128GB of internal storage, a dedicated headphone jack, and a rear fingerprint sensor for easy access.

But the main attraction for the 4a is definitely the 12-megapixel camera. Thanks to Google’s post-processing magic, this camera is unbeatable at the price and outperforms phones outside the price range as well. It takes great photos, which is such an outstanding bonus included with an already solid Android experience makes the 4a the safest bet to make for the Android camp.

The Pixel 4a 5G also deserves a mention here, as it includes a larger 6.2-inch display, an extra wide-angle camera, and, predictably, 5G connection. It costs $150 more than the standard 4a and definitely justifies that price bump, even if the focus on 5G isn’t relevant to many.

A Great Display: Samsung Galaxy A51

The Galaxy A51 is in the same price range as the 4a and SE, and while it doesn’t have the amazing upsides of either of those phones it’s still a solid option for the money. Being a Samsung phone, it runs OneUI 2.0—Samsung’s own version of Android that’s pretty different visually speaking and comes with a few unique features. The A51 uses Samsung’s Exynos 9611 processor supported by 4GB of RAM which, like many things with this phone, is a solid contender in the price range even if it’s nothing spectacular.

Unfortunately, Samsung has never been great about updating its phones, with most models only getting around two years of support. That means the A51 will likely only be updated until late 2021, and when it comes to major new releases of Android, Samsung tends to be pretty slow at keeping up. Android 11 should be arriving before the end of the year with OneUI 3.0, but there’s no specific release date yet.

Regardless, the A51 does have upsides, and the display is definitely one of them. This is an edge-to-edge 1080p 6.5-inch AMOLED panel. That’s pretty great for the money, and it’s encased in a premium looking and feeling glass body. You have access to both facial recognition and a fingerprint sensor for unlocking the phone, a dedicated headphone jack, and a MicroSD card slot if you want to upgrade from the default 128GB storage.

The camera is also fairly impressive with a 48-megapixel main sensor alongside ultra-wide, macro, and depth sensors. This makes the phone versatile when it comes to pictures, and while it’s not the best camera out of the lot, is certainly a plus for the A51.

Overall, while the A51 doesn’t do much to blow you away, it’s still a solid phone that’s helped a lot by its premium design and excellent display. For Samsung fans in particular who are used to OneUI, this is a great pick.

The G Power is the least expensive phone on this list, and while you may expect a phone that has nothing but comprises, Motorola did manage to get in one impressive feature for this phone–incredible battery life. This phone has a 5,000 mAh battery which, according to Motorola, is enough to support the phone for three days of use.

Besides the battery, the Moto G Power also has a Qualcomm Snapdragon 665 processor and 4GB of RAM under the hood. As you’d expect from the price tag, this phone isn’t a beast when it comes to performance, but considering it’s so inexpensive, the performance actually manages well. Software-wise, it’s running a custom version of Android by Motorola that’s relatively light on changes to standard Android. The phone only features 64GB of internal storage, but that can be increased through the MicroSD card slot.

The camera managed to sneak in with a three camera system: There’s a 16-megapixel main sensor, an 8-megapixel ultra-wide sensor, and a 2-megapixel macro lens. That’s a pretty good setup for the price, and speaking of things that good for the price, the 6.4-inch, 1080p LCD display is also fine for a phone of this caliber. You’ll also find a fingerprint sensor on the rear of the phone and a headphone jack on the bottom. The lifespan of this phone isn’t great though, with it only receiving two years of support both for security updates. On top of that, it’s unclear when the G Power will receive Android 11.

The Moto G Power isn’t the only phone in the “G” series—there’s also the Moto G stylus that costs $50 more, has a better camera, a 4,000 mAh battery for two days of use, and, as you might’ve guessed from the name, a stylus.

The TCL 10 Pro definitely has the look of a premium phone down, with a sleek glass back and an edge-to-edge curved, AMOLED 6.4-inches display at 1080p—there’s also a headphone jack on the top of the phone. Under the hood, you’ll find the Snapdragon 675 processor and 6GB of RAM powering it all, which performs adequately for the price and deals with TCL’s own flavor of Android well. The TCL 10 Pro comes with 128GB of storage along with a MicroSD card slot for expansion.

According to TCL, customers can expect a minimum of two years of security updates and one major Android release (which it already got in Android 11). Still, there’s the possibility of that being extended—just don’t place any bets on it.

The TCL 10 Pro also includes a nice suite of sensors for its main camera including a 64-megapixel main sensor, 16-megapixel ultrawide, 5-megapixel macro, and 2-megapixel depth sensor. You can definitely get some good pics out of this camera and the versatility is nice to see. Speaking of versatility, the TCL 10 Pro features both facial recognition and an in-display fingerprint sensor.

Finally, the last thing we want to mention is the TCL 10L, which is a less expensive version of the 10 Pro sold for $200 less. As you may expect, it has less power, lower-end cameras, and is smaller than the 10 Pro. But it’s still another solid phone for a low price that’s worth looking at all the same. 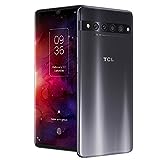