If you buy through our links, we may earn money from affiliate partners. Learn more.

As I’m lying in bed, I hear a voice telling me to relax and breathe normally. The calibration should only take a minute.

That may sound like something out of a science fiction story, but I’m actually describing the setup process for Google’s new $99.99 Nest Hub. Unlike Google’s previous smart home displays, the Nest Hub’s distinguishing attribute is its ability to monitor your sleep.

Of course, the Nest Hub does many of the other things you’d expect from a smart home display, but its efforts to improve your sleep set it apart from rivals.

It seems like a natural evolution for devices like this, which unlike the smartphones we carry in our pockets are meant to assist us at home rather than on-the-go. That’s especially true as tech giants are becoming fixated on health and the smart home.

Overall, the Google Nest Hub is a nice addition to your nightstand. But Google’s decision to start charging for sleep tracking in 2022 and the device’s sometimes sluggish performance limit its appeal. And while the Nest Hub’s sleep tracking is impressive, it can’t match a device worn on the body. 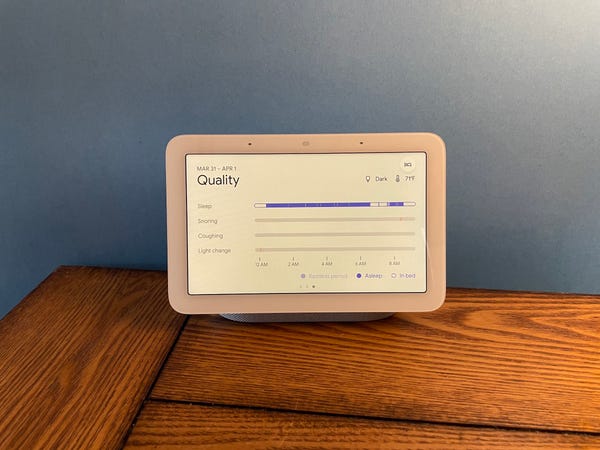 “Hey Google, how did I sleep?” As it turns out, I’m not very good at sticking to my sleep schedule. But I still manage to get enough sleep, even though it can be restless, according to Google.

A dashboard of statistics on the Nest Hub’s 7-inch screen reveal many more details, such as my total sleep time, whether there was any coughing or snoring overnight, the room temperature, my respiratory rate, and sleep efficiency.

The Google Nest Hub doesn’t have a camera, so you may be wondering how it works. Instead, it uses its Soli radar system to detect nearby motion, from large movements (i.e. tossing and turning in your sleep) to tiny, intricate changes such as the rising and falling of your chest as you breathe or a quick hand gesture.

The Nest Hub can glean a surprising amount of data for a device that isn’t worn on the body, but wearables still provide the most comprehensive tracking available. Fitbit (which Google now owns) and Oura devices can also tell you how much time you spent in deep, light, and REM sleep unlike Google, and provide heart rate insights among other tidbits.

But Google excels at making sleep data feel digestible, with quick verbal answers and two-sentence summaries. And it’s about as accurate as wearables when it comes to detecting sleep duration, respiratory rate, and efficiency, as shown below. I also feel like it was more accurate when detecting how long it took for me to fall asleep since I rarely fall asleep in five minutes.

First, it never runs out of battery since it’s always plugged in. Second, you don’t have to physically wear anything on your wrist. It’s also much cheaper than sleep tracking wearables like the $229.95 Fitbit Versa 3 or $299 Oura ring.

Still, there are also notable drawbacks to consider, the most important being that Nest Hub owners will have to start paying extra for sleep tracking features in 2022. The company hasn’t said how much these features will cost. It’s also worth noting that Fitbit also charges for certain sleep tracking features that require a Fitbit Premium subscription.

Since the Nest Hub sits on your nightstand, it can be difficult for it to differentiate between you or your partner. Not only did it pick up my husband’s snoring, but on one occasion it also said I got out of bed about a half hour later, falling in line with when my husband started his day.

Winding down and waking up 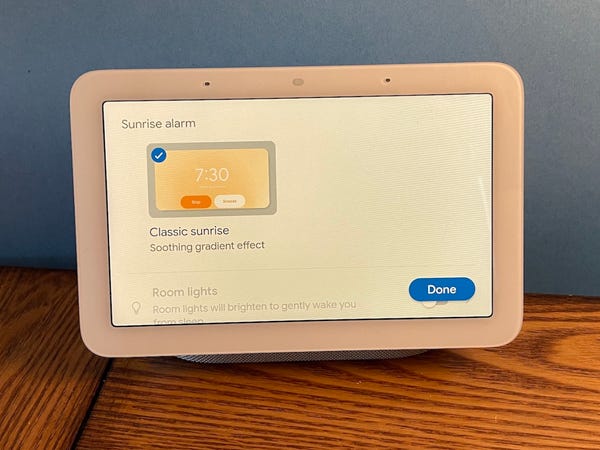 Google’s sleep tracking features may not be as comprehensive as those offered by wearable trackers. But the company is betting that its position on your nightstand will make it the ultimate bedside companion anyway.

The Nest Hub can also play soothing sounds to help you fall asleep, like rainfall (my personal favorite) or crickets chirping.

In the morning, it gradually brightens the screen over a 30-minute period prior to your wake-up time. But since the device itself is so small, the brightness wasn’t enough to wake me up. If you want a sunrise alarm clock, I’d suggest buying a dedicated device rather than the Nest Hub.

I liked using the Nest Hub as an alarm clock, especially when its gesture controls worked well enough to dismiss alarms  by pointing rather than scrambling to find the right button. However, it didn’t always respond to my gestures, which may be because I couldn’t get the gesture exactly right in my sleepy early-morning state. 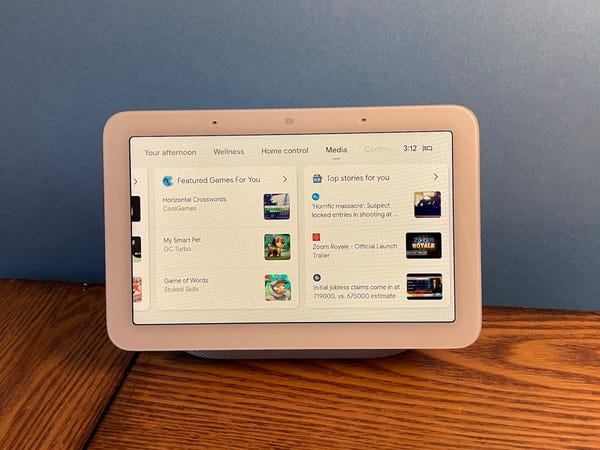 Google already knows a lot about our daily routine, so giving it a window into our sleeping habits may give you some pause.

Google says it doesn’t use any sleep data for ad personalization, and audio information like coughing and snoring is processed on the device itself. You can choose to turn off coughing and snoring detection and sleep sensing any time. Since it uses radar instead of a camera, Google doesn’t actually see your body or face.

Like other Google smart speakers, there’s a dedicated button for muting the microphone. You can also delete voice and sleep data in Google’s Home and Fit apps.

Still, it would be nice to see an extra layer of protection should anyone gain access to your phone or Google account. Venmo, for example, offers the option for passcode or biometric authentication, and it would be great to see similar choices for protecting sleep and voice data in Google’s apps.

To be fair, Amazon and Apple don’t offer that functionality either, but it could keep the minds of privacy-conscious customers at ease.

One way Google excels over other tech companies when it comes to privacy is in its Guest Mode, which lets you choose not to save

Google Assistant
activity to your Google account and prevents personal results from being shown. It’s essentially like Chrome’s Incognito Mode, but for the Google Assistant. 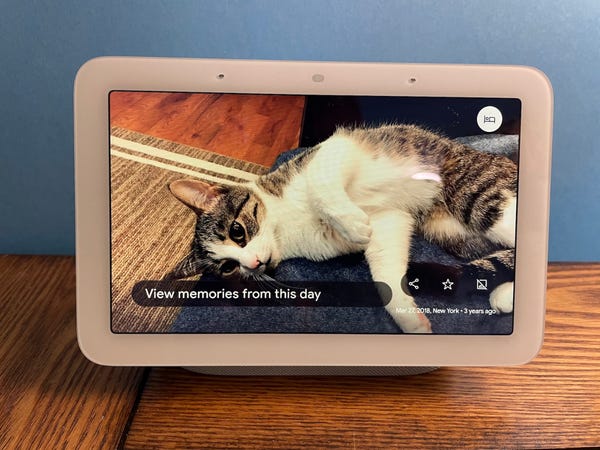 
The Google Nest Hub’s biggest new feature is sleep sensing, but it does a lot more than that. The Nest Hub can play music, movies, and TV, read the news, make voice calls (via Google’s Duo app), and control smart home devices.

My favorite way to use the Nest Hub was as a bedside digital photo frame. You can sync the Nest Hub with your Google Photos account and tell the device to only surface photos with the people and pets of your choosing, preventing it from showing irrelevant photos.

The Nest Hub works fine as a miniature speaker for playing music, but it’s not as loud as the $49 Amazon Echo Dot, which lacks a screen and sleep tracking capabilities but includes other popular features like smart home controls.

The Nest Hub’s motion controls for playing and pausing music work impressively well when you’re close to the device. But responsiveness was spotty when I moved more than a foot away or was at a slight angle.

The bigger problem, though, is the display can feel laggy. When tapping a recipe, for example, there was significant delay before the link opened. 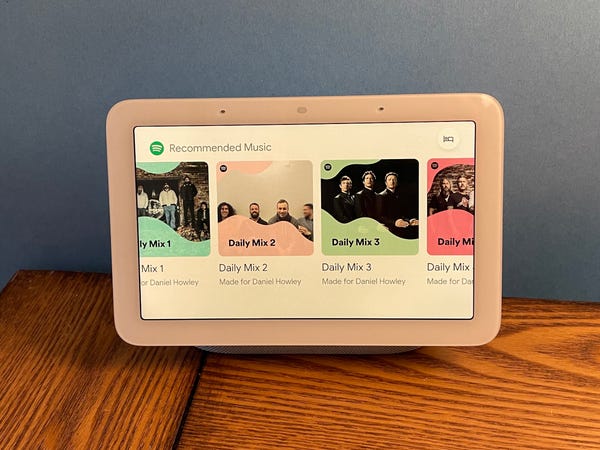 The Google Nest Hub is a nice bedside companion for anyone in need of a smart display that can serve as an alarm clock, music player, and digital photo frame in one.

My advice: Get the Nest Hub if you primarily want a bedside alarm clock that comes with the full functionality of a smart home speaker. Wearables, even those as cheap as the $50 Samsung Galaxy Fit 2, can provide more detailed sleep data in some ways, and we still don’t know how much Google will charge for sleep sensing next year. However, I would recommend the Nest Hub if you want to get a better understanding of whether you or your partner is snoring or coughing throughout the night.

The $49 Echo Dot is hard to beat for those who just want a bedside alarm clock and speaker. It’s also louder than the Nest Hub, making it better at filling a room with sound.

Amazon’s $130 Echo Show 8 is also a great alternative since it’s around the same size as the Nest Hub, but also has a camera for video chatting.

Sleep trackers worn on the body such as Fitbit‘s and Oura‘s can provide more information about your nighttime habits, such as how much time you spent in specific stages of sleep.

The Nest Hub shines as a bedside companion and alarm clock, but you’ll have to pay extra for sleep tracking features that aren’t as detailed as those provided by wearable devices.

Pros: Tracks sleep without having to physically wear a tracker, works great as a digital photo frame, good for setting alarms and winding down before bed

Cons: Have to pay for sleep tracking next year, sound isn’t as loud as Echo Dot, sluggish performance