As Australian authorities pursue a plan to have Big Tech companies pay news sites, Facebook shut down all pages that could be even vaguely be described as news ones.

As it has previously threatened to do, Facebook has removed news pages in Australia. It follows continued progress by authorities toward a proposed system of charging social media firms.

Alongside pages from news organizations, however, Facebook also shut down some charities, plus emergency services and health pages. According to Reuters, Facebook has since restored the government-owned pages, but very many others remain inaccessible to users in Australia.

“Facebook’s actions to unfriend Australia today, cutting off essential information services on health and emergency services, were as arrogant as they were disappointing,” said Australian Prime Minister Scott Morrison — Â in a post on Facebook.

“These actions will only confirm the concerns that an increasing number of countries are expressing about the behaviour of BigTech companies who think they are bigger than governments and that the rules should not apply to them,” he continued. “They may be changing the world, but that doesn’t mean they run it.”

“We will not be intimidated by BigTech seeking to pressure our Parliament as it votes on our important News Media Bargaining Code,” said Prime Minister Morrison. “Just as we weren’t intimidated when Amazon threatened to leave the country and when Australia drew other nations together to combat the publishing of terrorist content on social media platforms.”

“I encourage Facebook to constructively work with the Australian Government, as Google recently demonstrated in good faith,” he concluded.

In a statement seen by Reuters, Facebook explained that the blocking of government pages should not have happened, but that it is unable to restore other affected pages.

“[As] the law does not provide clear guidance on the definition of news content,” the statement continued, “we have taken a broad definition.”

These other affected pages include a mothers’ group called North Shore Mums which has 35,000 followers. Organizer Rachel Chappel says Facebook’s move has “completely shaken” her.

“We’re a mum’s website,” she said. “We are small and niche. This is not fair. I think they are just bullies. They are shooting themselves in the foot. 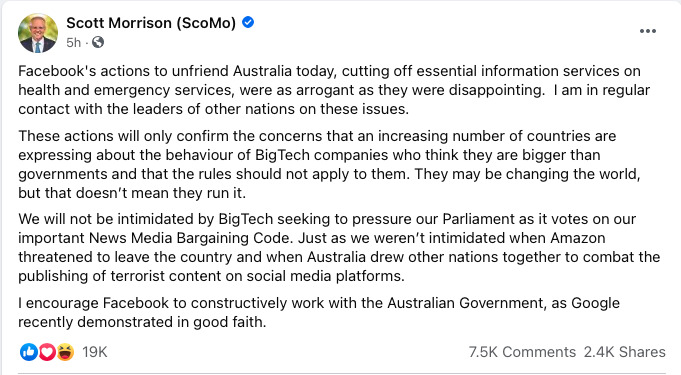 Peter Lewis, director of the Australia Institute’s Centre for Responsible Technology told Reuters that the move “is destroying its social licence to operate.”

“Without fact-based news to anchor it, Facebook will become little more than a cute cats and conspiracy theories [page],” he said. “If Facebook determines to treat Australians with such contempt, Australians should respond by ending its use of Facebook and using alternate ways to connect online.”

If fully implemented, Australia’s ongoing proposal would “allow news media businesses to bargain individually or collectively with Google and Facebook over payment for the inclusion of news on their services.” As well as negotiating payment, the proposal would require Facebook or Google to provide news organizations with advance warning of changes to algorithms.

Facebook has previously claimed that the Australian Competition and Consumer Commission (ACCC)’s draft proposal “ignored important facts.” These included what Facebook described as its investments in Australian news companies that amount to millions of dollars.