Belkin appears to be working on a new “Belkin Soundform Connect” adapter that will connect to a standard speaker to add AirPlay 2 capabilities. 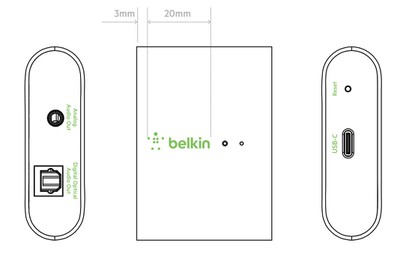 The adapter was found in
FCC filings by Janko Roettgers (via
9to5Mac), and it looks like it will be powered by a USB-C cable and will feature a 3.5mm mini jack port for audio output and Optical Digital Audio.

When a speaker is connected to Belkin’s adapter, an iPhone, iPad, Mac, or other Apple device will be able to see it as an ‌AirPlay‌ 2 speaker.

‌AirPlay‌ 2 is a multi-room audio feature that lets you stream music to more than one ‌AirPlay‌ 2 enabled speaker. ‌AirPlay‌ 2 is available on the HomePod, HomePod mini, Apple TV, Sonos speakers, and other third-party speaker options.

The Belkin Soundform Connect will also add HomeKit support, which will allow the speakers to be assigned to a room and to be controlled with Siri voice commands or the Home app.

There’s no word on when the Belkin Soundform Connect will be released, but it could be priced at around 100 euros or $120.