The entire world seemed to be in lockdown, and yet April 2020 still turned out to be an extremely busy month for Apple with new products like the iPhone SE, new controversies, and surprises.

Following Apple’s comparatively quiet March 2020, You couldn’t move for Apple anniversaries in April. But then we were in coronavirus lockdown so it’s not as if you could move much anyway. Even with the world in chaos, though, there were these anniversaries of the iPad, the iMac, the Apple II, and even Apple itself. Plus there were new products, and there were some reassuringly familiar things in April 2020.

Such as Facebook having a security scandal. It wouldn’t be a month with a day in it if Facebook hadn’t done something a little untoward. This time it was that the social media giant was revealed to have tried to track iOS users’ activity through spyware called Pegasus.

We’ve gone beyond being shocked at Facebook, but this month some people were relieved by it. Zoom should be the hero of the COVID-19 lockdown but instead our self-isolating world became divided into two groups of people.

There were those who’d had Zoom security problems and those who haven’t yet. It just felt as if was no third group of anyone who isn’t using this video tool, unless they work for places that banned it, such as the US senate. Or Google.

Although there was definitely a group of people who were each using Zoom on their new MacBook Air. Following the launch of this machine in March, orders were now arriving and we were all getting to find out that, yes, that Intel-based MacBook Air was the Mac to buy.

Apple reaches into its pocket

While Apple presumably continued to earn money from the MacBook Air, it did spend some to help us all out, too. During April, the company allowed Apple Card users to defer their payment interest-free, for instance.

It also donated $10 million to the “One World: Together at Home” COVID-19 fundraiser, and an unspecified amount to the BBC’s “The Big Night In,” too. In both cases, Tim Cook appeared on video conference to show that he’s like the rest of us and needs some human contact. 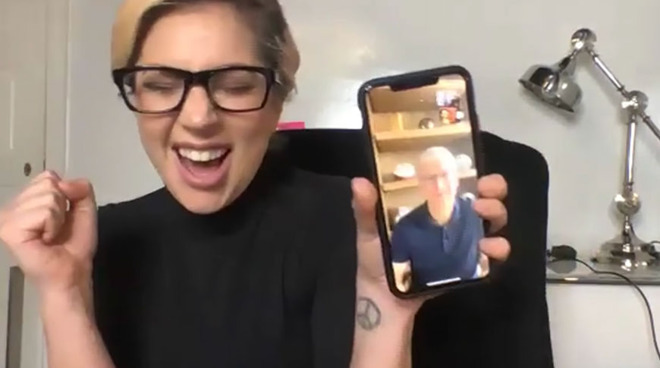 Even Tim Cook needs some FaceTime contact. And he does have Lady Gaga in his Contacts book

Speaking of contact, it was during April that we learned how a small team within Apple created a proposal for a contact tracing, or exposure notification, service. Working together with Google, the company devised a system that would mean iPhones and Android phones will be able to unobtrusively help track the spread of COVID-19.

That also meant both companies got immediately hammered about privacy concerns. It was unusual for Apple, of all firms, to be accused of privacy risks, but then it wasn’t at all out of character for Google to, so it mostly balanced out.

There were complaints from US Senators, and then the EU, too, but generally it’s now seen that Apple and Google’s solution is strong on user privacy.

That might be down to Apple’s calm, considered, authoritative explanations, and it might be down in part to how the two companies improved the technology in response to the criticisms. But ultimately people tended to accept Apple and Google’s technology as being secure chiefly because some world countries rejected it in favor of systems that demonstrably worse. At least most of those countries would end up abandoning their expensive home-grown apps for the simple reason that they didn’t work.

In the UK, for instance, the NHS was using the Apple system but then decided that it preferred its own technology expertise instead. Although when AppleInsider asked them about it, their email system failed. It was a presage of just how poor that UK system would eventually become before it was ditched.

By contrast, Germany seemed to listen to advice and changed to supporting Apple and Google. The developer of France’s StopCovid app, though, had a go claiming that Germany hasn’t really changed, no, no, and also that Apple may yet give in to the country’s demands to loosen iOS security. Not going to happen, said Apple.

While Apple was busy making this contact tracing technology, it reportedly wasn’t busy making the forthcoming iPhone 12. Rumors that the new phones would be delayed continue to come out just about as often as claims that no, it’s all on schedule.

But we did seem to get a more reliable read from analyst Ming-Chi Kuo, who became the first of many people to report that mass production is delayed by around a month. The new phones should be in engineering verification testing at the moment, Kuo says, but the laboratories that do this work are currently closed.

Apple could still announce the phones at the usual September time, it seemed, but Kuo believes that they will ship later, much as the iPhone X did back in 2017.

While Kuo continued to be the most reliable analyst around, April saw the rise of leaker Jon Prosser, too. Even before this month, he was claiming inside knowledge of Apple’s plans — and then on April 15, he was proved right. 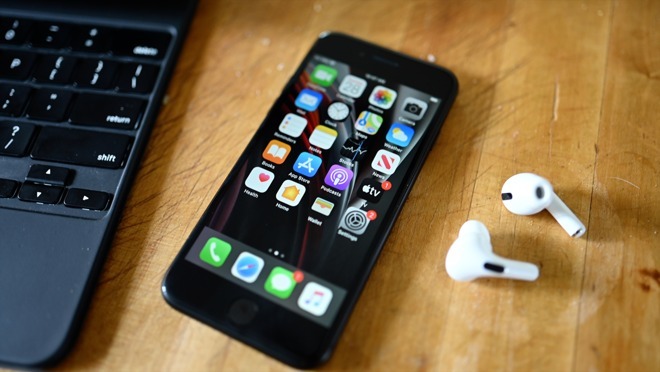 At last the iPhone SE sequel

That’s when the iPhone SE, second generation, was officially launched. It’s fair to say, too, that it lived up to all the hopes for it that had been building over the last many years.

While it eschewed the previous, smaller 4-inch screen, and some complained that its basic design was old, this was that rare Apple thing, the instant classic.

Starting at $399, the new iPhone SE has much of the innards of an iPhone 11, and for its combination of price, performance, and features, it’s got to be a smash. We’re going to sound like fans or employees of the Apple marketing department, but no, this is straight factual information.

This is the cheapest iPhone Apple makes and it blows away the most expensive Android phones. We called it “the definition of affordable smartphone power” in our full, detailed review.

So, let’s just recap for one second. Maybe Apple hasn’t actually released what you could call a cheap iPhone, but it has released one that is cheaper — and immensely powerful. And throughout April, users were getting their MacBook Air deliveries and finding that the cheapest portable Mac is immensely powerful.

It’s almost enough to make you think Apple has changed — but then the wheels came off that idea. Almost literally. For right alongside the high-profile launch of the iPhone SE, Apple quietly released a set of wheels for the Mac Pro. Wheels.

Four of them. For $699. That’s more than the $400 it would cost you buy the same wheels if you chose them alongside your Mac Pro. And if you had made that choice, you could now change your mind and switch from wheels to feet for a mere $299.

If you’re counting, that means the new iPhone SE is cheaper than the wheels on the Mac Pro. Still, if you did buy these wheels, you know that they are particularly well made. You might just wish you’d held on to your cash a little longer, though, because Apple wasn’t done with expensive products in April.

When the Magic Keyboard for iPad Pro was announced in March, Apple said that it would be available in May. Surprise. It was launched instead in mid-April. For the cost of about two Mac Pro wheels, you could now order a $349 Magic Keyboard.

Apple was making wheels for high-end Mac users, an iPad Pro keyboard for some people, a MacBook Air for everybody else, and an iPhone for the entire world. Somehow in the middle of a coronavirus lockdown, Apple was still pumping out products — and hitting every possible price point.

Even so, it is hard to ignore the massive impact of the COVID-19 lockdowns, and analysts were expecting some bad news during Apple’s legally-mandated financial conference call on the last day of the month.

Perhaps you don’t lie awake at nights worrying about the fortunes of this company, but maybe we could all do with considering just how Apple has done this. Especially when you think that in the 1990s, this company was within days of going bankrupt, it’s been a remarkable lesson in recovery.

Part of it is the company’s unquestioned and admirable focus on design, but part of it turns out to also be an ability we might all be able to emulate, of diversifying. In these days when so many of us are seeing our jobs endangered, it’s educational to see that Apple’s earnings came in great part because of its services and wearables divisions.