Apple AR may not be confined to what you can see through “Apple Glass.” It may also give users force feedback through Apple-designed socks.

Apple has previously sold socks, but more as an iPod protector than footwear. Now it’s looking into at least the technology that could make socks — and shoes — a key part of the whole Apple AR experience.

“Haptic output devices,” is a newly granted Apple patent which is concerned with providing feedback to a user across many different combinations of devices and apparel.

It’s not just about standing, either. The drawings accompanying the patent show a range of possible devices, from push-buttons to lipstick-shaped chambers. Most are meant to be parts of larger devices — such as socks and shoes — and Apple’s patent is concerned with balancing feedback with convenience.

“If care is not taken, haptic output may too weak or may not provide a desired sensation for a user,” continues the patent, “haptic output may not be applied to an appropriate location on the body of a user, or a haptic output device may be overly bulky or difficult to use.”

The major part of the patent’s descriptions concentrate on the example of a “haptic output device configured to be worn on a user’s foot.” This “foot-wearable support structure” is typically divided into “a bottom portion and a top portion.”

As ever, Apple’s patent is long on detail about components — it describes “piezoelectric…, electroactive polymer…, electromagnetic actuators, and other haptic output components.” And it’s very short on descriptions of why anyone would want this haptic feedback.

However, as it describes “asymmetrical sawtooth drive signals,” it says that the intention is “to provide the user with a feeling of movement in a single direction while the user’s foot remains at a fixed location.” 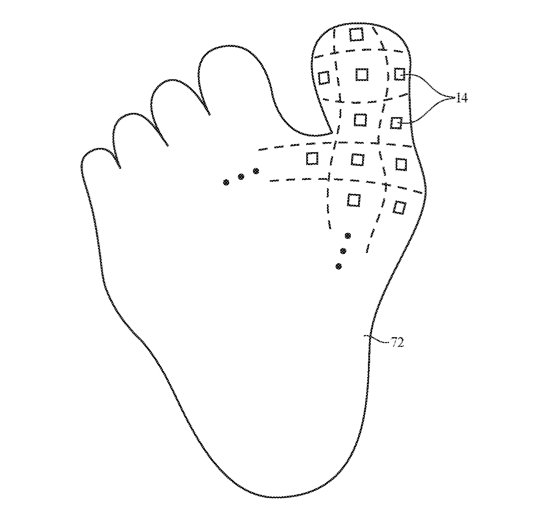 So one can readily imagine playing an ice-skating game while wearing “Apple Glass,” for instance. Or if there are also gloves fitted with such haptic feedback, perhaps feeling the sensation of rock climbing.

“During operation, shear forces and forces normal to the inner surfaces of a foot-shaped support surface and/or the exterior surface of a foot platform may be generated,” continues the patent. “These forces may provide a user with a sensation of resting or sliding across a tiled surface or other surface with surface irregularities. Friction effects (e.g., resistance to lateral motion) and other effects may also be produced using the haptic output devices.”

The patent is credited to the prolific Apple inventor Paul X. Wang. Among his very many previous patents and patent applications for the company, is one for a haptic system that could monitor a user’s grip on Apple Pencil.