Apple CEO Tim Cook this morning spoke at the virtual Computers, Privacy, and Data Protection conference where he discussed Facebook’s business model and Apple’s upcoming enforcement of App Tracking Transparency, and afterwards, he elaborated on some of his speech in an interview with Fast Company. 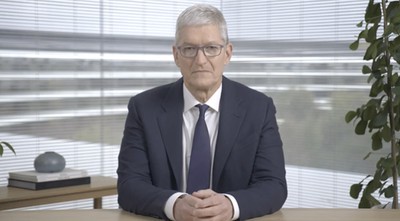 Cook said that privacy is “one of the top issues of the century” and that it’s important to put “deep thinking” into that to figure out how to “leave something for the next-generation that is a lot better than the current situation.” Cook said privacy “should be weighted” like climate change, another huge issue the world is facing.

On the topic of why people should care about their privacy, even when there’s nothing to hide, Cook said that he tries to get people to think about living in a world of constant surveillance, something that Apple did this morning with the release of a document called “A Day in the Life of Your Data” that details how third-party companies track user data across websites and apps.

“And so I think most people, when they think of it like that … start thinking quickly about, ‘Well, what am I searching for? I look for this and that. I don’t really want people to know I’m looking at this and that, because I’m just curious about what it is’ or whatever. So it’s this change of behavior that happens that is one of the things that I deeply worry about, and I think that everyone should worry about it.

Cook also pointed out that not all “Big Tech” companies are the the same, and he said that he worries about the “broad-brush categorization” of giving major companies like Facebook, Google, Microsoft, Amazon, and Apple all one label. “I try to encourage people to think a level deeper than that and think about the companies themselves and their business models and how they conduct themselves, and so on and so forth–what their values are,” he said.

Cook was asked about whether he thinks artificial intelligence is a threat and how it ranks compared to privacy, and he said that “both of those” can be used negatively and can be “amplified by technology.” Cook said that ethical AI, and ethical data privacy and data collection are both important issues that “have to be worked on.”

Fast Company‘s full interview with Cook also touches on technology and extremism, privacy legislature and regulation, and the future of privacy in tech, and it’s well worth a read.