Passengers of the “Apple Car” may only be able to see displays inside the vehicle while wearing special glasses for privacy, while the driver may discover the car’s seat and steering wheel could change position automatically by detecting the presence of their iPhone.

The “Apple Car” is a long-rumored product that has been in development for a considerable length of time, but reports from the start of 2021 claim it may not be too long before it officially launches. Apple is said to be in talks with Hyundai subsidiary Kia to make the car for a potential 2024 launch, with a “beta” version likely to surface in 2022.

As a car that is thought to include an electric drive train and self-driving vehicle systems, the “Apple Car” is also anticipated to have many other radical designs, affecting both its appearance and its utility.

In a pair of patents granted on Tuesday by the US Patent and Trademark Office, Apple offers ways the vehicle could be different, both in terms of privacy and for driver comfort.

The first patent deals with a problem relating to in-vehicle displays. Unlike an analog dial or other non-illuminated elements informing the driver, a display typically emits light, and can potentially be readable from outside the vehicle by other road users.

Furthermore, for in-car entertainment, passengers may not want to watch the same content if only one screen is available. Having multiple displays may be an expensive solution, but also one that may result in users having smaller screens to view, rather than a larger shared screen.

The patent, titled “Multi-user display system,” aims to fix both elements by talking advantage of a concept explored by some 3D televisions that use special glasses. Passengers inside the vehicle are given glasses to wear that use a liquid crystal light modulating system, namely an active shutter system that repeatedly blocks light and lets it through. 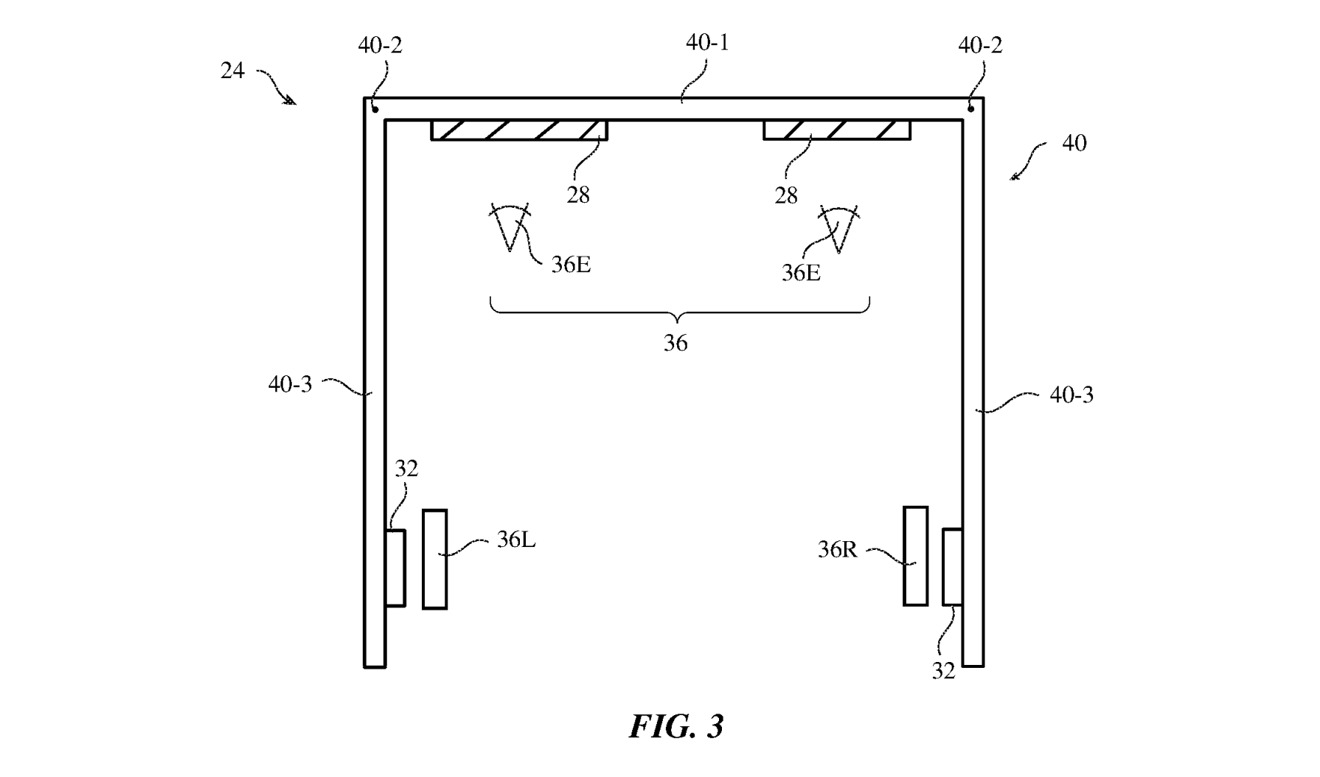 The glasses could have built-in headphones for entertainment purposes.

This system is synchronized to the display system, allowing content to be emitted only at times when the shutter of the glasses are open. This happens at such a high rate that the wearer doesn’t observe the shutters opening or closing, but can see the content.

To make the system private, Apple suggests that for times that the shutter in the glasses is closed, the same system displays other bogus content, making the user-viewable content unreadable for external observers who do not have the synchronized glasses.

The concept can be extended to account for multiple users and unique content. By adjusting the timing of the glasses to be offset, this means the system could display one set of content while one user’s shutter is open and another’s is closed, then switches to show different content to coincide with the opposite shutter arrangement.

The patent lists its inventors as David E. Kingman, Clarisse Mazuir, and James R. Wilson. It was originally filed on July 17, 2017.

One thing drivers of a shared vehicle have to contend with is a need to change how they are seated in the vehicle when they get in. Changing the position of the chair, the steering wheel height, mirror positions, and other elements may have to be updated, both for the safety of the driver and for comfort.

In the second patent named “Automatic configuration of self-configurable environments,” Apple suggests that the entire process of changing these and other items could be considerably easier for drivers, by automating the entire process.

Some vehicles already do this, providing automated changing of settings to suit the user at the touch of a button, but there is still room for improvement. For example, the process of telling the car to to change configuration could be eliminated entirely.

It may also be beneficial in making the settings portable from vehicle to vehicle, so a user doesn’t have to set up the configuration in every new vehicle they enter. 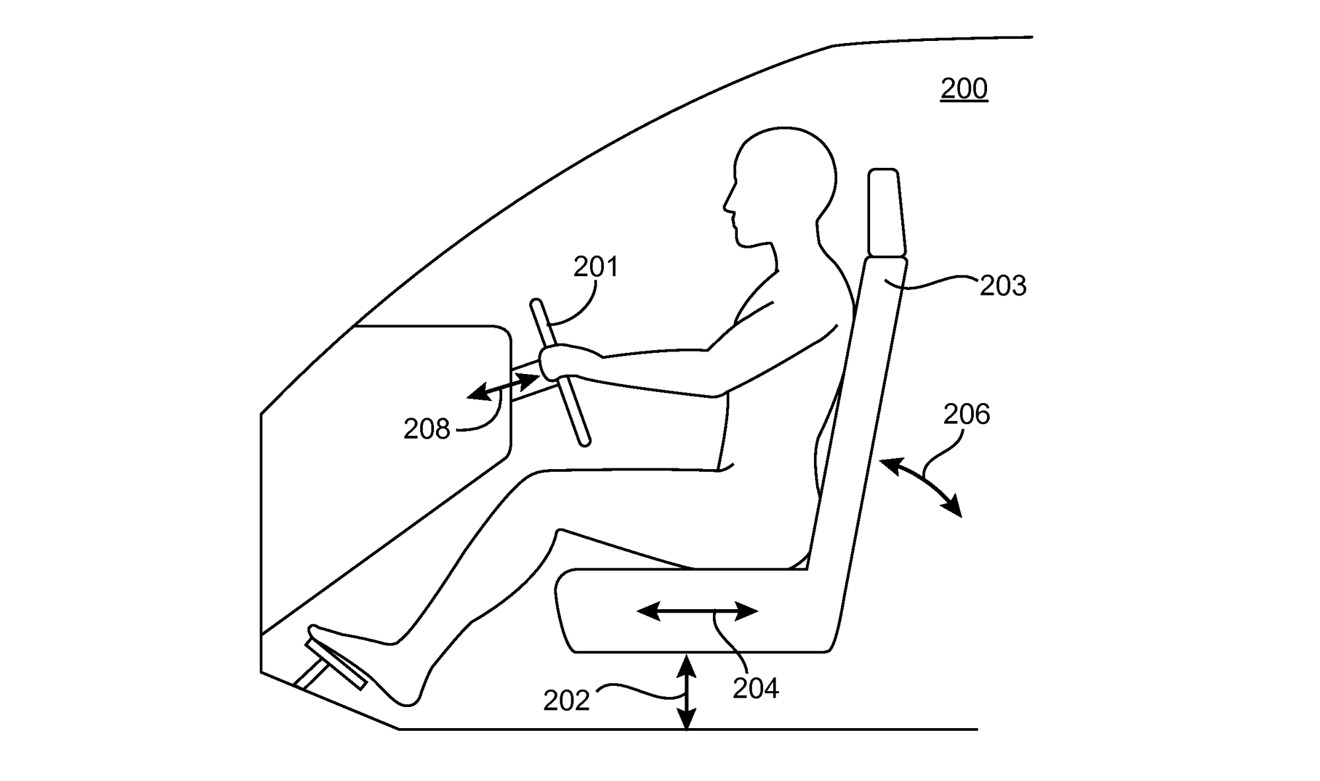 The configuration could include the seat height, distance from pedals, lean, and other components.

Apple’s solution involves the use of a mobile device that can carry multiple configuration settings, which could be read and interpreted by the vehicle over a wireless connection, which in turn changes the position of in-car elements. In effect, it could automatically configure the vehicle on detecting a driver approaching the vehicle.

Once the mobile device is aware of a configuration for one type of vehicle, it could also convert the data into a standard measurement, which can then be used in creating an initial configuration for a second vehicle the user may enter. This would give a baseline configuration that could be close to ideal for the driver, but could be further tweaked and saved for future configuration needs.

The patent was invented by Thomas Ethan Lowry, and was filed on September 21, 2018.

Apple files numerous patent applications on a weekly basis, but while the existence of a patent indicates areas of interest for the company’s research and development teams, it’s not a guarantee that the idea will appear in a future product or service.

This is also true for many other patents that can apply to the “Apple Car.”

The idea of using glasses in a car has been explored before, with Apple suggesting it could employ AR and VR headsets to offer virtual environments and enhance how data is presented to passengers, while taking into account inertia to reduce the chance of motion sickness.

Apple’s CarKey is a digital key system that can use an iPhone to act as a key for a vehicle, one that could unlock or start a car. Given that data is transferred as part of the process, it wouldn’t be a massive stretch to imagine configuration data could be exchanged at the same time, which could allow the first patent to work.